I was a fly on the wall recently while some folks were troubleshooting a stored procedure, and one them made the statement that “transactions don’t start until you do something that needs a transaction.” I had never heard this before, and thought it was interesting. Intuitively, I would expect a transaction to begin as soon as the BEGIN TRAN statement is executed.

As it turns out, my intuition was wrong (shocking, I know 😜). The documentation for BEGIN TRANSACTION starts out like this:

Marks the starting point of an explicit, local transaction. Explicit transactions start with the BEGIN TRANSACTION statement and end with the COMMIT or ROLLBACK statement.

Of course, no one reads the documentation. And even if they do, they certainly don’t continue on to the 4th paragraph of the “General Remarks” section. That’s like going to the second page of Google search results.

If one did trudge on through the docs, they would find this gem:

I have created a database on my local SQL Server 2017 instance, and it’s using the SIMPLE recovery model. The script below performs a CHECKPOINT (to clear the log file), then runs a non-modification query in a transaction. I’m also checking the contents of the file before and after the “transaction.”

The only log records shown are those documenting the CHECKPOINT operation: 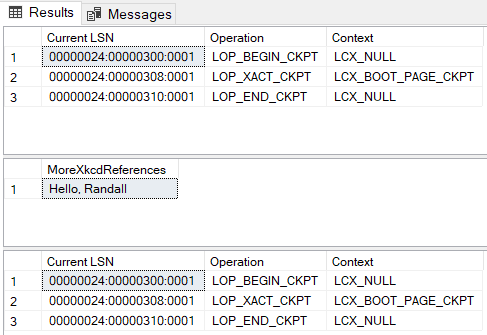 This goes against my “intuition” where I originally thought that we would see LOP_BEGIN_XACT and LOP_COMMIT_XACT records.

Now, in addition to the existing 3 log records for the CHECKPOINT, there are 25 more for the transaction and table creation - including the two I mentioned above: 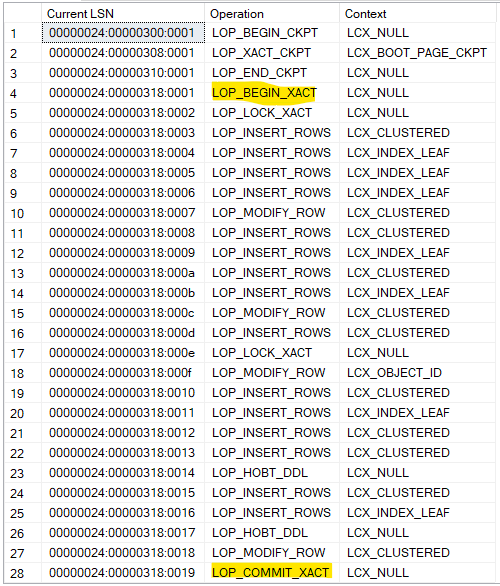 As an aside, you might be wondering why there are so many insert and modify operations logged, including some against clustered tables (considering all I did was create a heap). Almost all of these entries in the log are related to the database metadata system tables that keep track of information about tables, columns, etc. DDL statements do a lot more than they look like on the surface (something I’ve been burned by before)!

In practice, you could see some confusing errors due to this behavior.

Since this demo requires the SNAPSHOT isolation level, I’ll enable that:

Then I’ll insert a row into that table we created, and update that row inside a (default, locking read committed) transaction:

Next I’ll open a new SSMS window and run this script, which starts a SNAPSHOT transactions to modify the same row as the one in the table above. It immediately starts waiting (at the first UPDATE statement) on the lock currently held by the query in the first window.

If I now go back to the first window and and execute:

The snapshot query fails immediately with this (expected) error message:

Msg 3960, Level 16, State 6, Line 4
Snapshot isolation transaction aborted due to update conflict. You cannot use snapshot isolation to access table ‘dbo.BeretGuy’ directly or indirectly in database ‘IntoTheLogFile’ to update, delete, or insert the row that has been modified or deleted by another transaction. Retry the transaction or change the isolation level for the update/delete statement.

Notice that the error is on line 4, which is the first update query in that script. If that were a procedure, and I was troubleshooting issues with it, I might try commenting out the first update - just to see if I can get past that problem.

If I repeat the steps above with the first update commented out, I actually get results from the SELECT query (yay, right?), and then this error immediately follows:

Now the error is on line 11 (the second update query in the script). Even thought the script was doomed to fail, the SELECT was still able to complete, because the transaction doesn’t really start until the UPDATE query (where it then fails due to snapshot write conflict detection).

As I continue to thrash around troubleshooting things, I might also notice that the whole demo succeeds if I avoid using the SNAPSHOT isolation level. Of course, this changes the logic of the system.

This example is rather trivial, but imagine debugging a complex procedure, with lots of moving parts. Seeing errors seemingly move around, or some parts of the query succeeding while others fail, would be pretty puzzling.

It makes total sense that the BEGIN TRAN won’t be written to the log until it’s actually necessary. Writing to disk is expensive, so SQL Server will avoid it when possible. There are all kinds of nifty little things SQL Server does behind the scenes to avoid writes (see Paul White’s The Impact of Non-Updating Updates for another example), and I thought it was cool to learn that transactions are on that list.

It can be helpful to keep this in mind when troubleshooting procedures that use explicit transactions, as errors might be reported in surprising places depending on where the transaction actually “begins” (according to the transaction log).