One of the nice things about ORMs from a development standpoint, is that you can really easily access “related entities.”

For instance, if you’re looking at a comment on Stack Overflow, a natural related entity would be the user object.

All Loops Are Terrible

Let’s say my requirement is to show an arbitrary list of 100 comments and who said them.

One way to do that would be this: 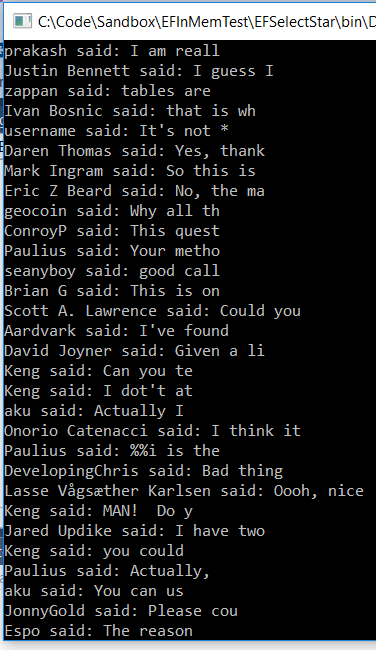 Notice I’m able to easily access the user’s display name, even though I queried for comments.

The ToList() line produces this SQL:

It’s easy to think that, after getting the Comments and calling “.ToList()”, all of the querying is over.

This is not the case.

Each time we access comment.User inside that loop, Entity Framework sends a query to SQL Server that looks like this:

So that innocuous code executes 101 queries. I’ve heard this called the “N+1 query problem” by Oren Eini (AKA Ayende). It’s also one of the warnings emitted by MiniProfiler, a lightweight profiling tool created by the folks at Stack Overflow.

This is called Lazy Loading, and is the default mode of fetching related entities and child collections in Entity Framework (and NHibernate).

I think this is actually a reasonable default, since many times you are probably not accessing those entities at all. If every time I searched for a User in EF, it also loaded every Comment that user ever left - just in case I needed it - I’d be a little peeved.

What To Do About It

We need to tell the ORM that we want the related entities up front - then it’s smart enough to write a query that includes all of the data we need. The general term for this approach is eager loading.

In Entity Framework, this is done using the Include method (NHibernate calls it Fetch). Adding that call to our code:

Results in this SQL being executed:

Much, much better - we left join to get the user with the comments all in one query!

Note that we could, and should, define a projection in order to avoid selecting all the columns.

Do This Up Front

This requires some extra legwork from developers, but try to always think about what data your ORM query will be using. If there are related entities involved, make sure to define that requirement with Include.

This is the kind of problem that gets much, much worse over time. It’s not terribly painful to have 100 rapid-fire queries like this - but what about 1,000? 10,000? You get the idea. Better to handle this one up front - it’s just one method call ;)