Tables rebuilds can wreak havoc on your database. So what are they, why are they bad, and what can you do about them?

What is an SSDT table rebuild?

I’m glad you asked. When deploying an SSDT project, SSDT compares the source code (your project) with the destination (the target database) to determine how they are different, and what T-SQL commands are needed to bring the target in line with the source.

Certain types of column changes will cause SSDT to decide to do the following:

All of this is done inside a SERIALIZABLE transaction.

The rebuild code is always replaced with a comment warning you what’s about to happen. The whole code block looks a bit like this:

So why is this bad?

I’m sure you are appalled by the code above to the point where little explanation is needed, but here are a few of the highlights:

What can we do about it?

As a very misguided developer, I feel like my shiny new CommentCount should go between the Id and PostType columns, because it looks nicer:

By default, SSDT sees the difference in the ordinal position of the columns and wants to sync them back up. So it will rebuild the whole table to accomplish this. A new “Ignore Column Order” option was added last year to opt out of this behavior: 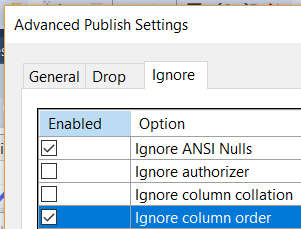 Similar to the above, dropping a column can cause the table to rebuild the table to get the column order right. Use the same setting to avoid this.

I included renaming columns here as well, as SSDT often sees a rename as a drop and re-add. To avoid the drop and re-add behavior, you can rename columns inside the design pane in Visual Studio (which will update the refactorlog.xml file, used at deploy to choose the correct deployment behavior).

I tend to not use the design pane much for various reasons (I don’t like the formatting and capitalization choices it makes in the generated T-SQL, and adding named constraints requires a lot of clicking and bouncing back and forth from the design pane to the T-SQL editor). But renaming columns is a good time to use it.

This one is a bit trickier. Sometimes, data types changes will cause the rebuild behavior to occur. Similarly, changing a column between NULL and NOT NULL can do the same.

The resolution to this one is to use “pre-DAC” scripts - basically, a T-SQL script you can run to manually make your rebuild-causing changes in a less production-impacting way. I’ve posted an answer about this on Database Administrators Stack Exchange:

I plan to flesh that out in a blog post in this “SSDT Problems” series soon.